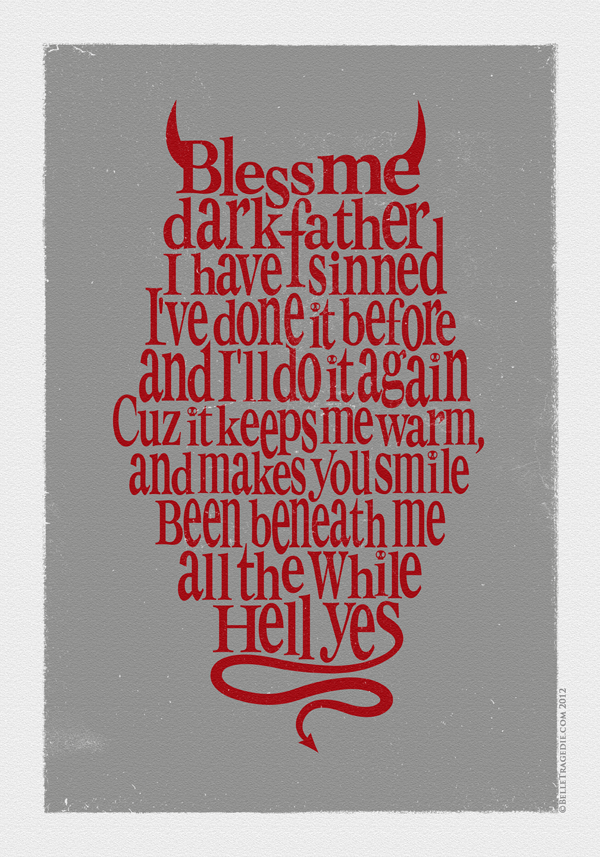 I’m now 3 weeks into fatherhood. It has probably been the hardest but most amazing 3 weeks of my life so far. I say so far as I have been told by many people it doesn’t really get easier you just learn to cope better. I’m doing ok with the nappy changes and the constant routine, but its the interrupted sleep I am having trouble with. Waking up every 2 – 3 hours is not really what I was made for, but as long as the little guy is healthy and happy thats all the motivation I need. New life really is amazing.

Ok, less about my personal life.

This illustration, or typographical print has nothing to do with having a baby or changing nappies. It’s an idea I’ve have for a while but have only just got round to finishing. It’s based on the lyrics to the first ever Alkaline Trio song I heard over 10 years ago and is titled ‘Hell Yes’. The song has been very influential on not only my artwork but also me as a person. It made me take a look at the world, life and people from a different perspective and in some ways helped shape who I am as a person.

The lyrics can be taken a number of ways, it depends how seriously you want to take them. On one hand the song flirts with the idea of faith and religion, but in a lighter sense it could be a song about rebellion or love. Probably best to take a listen and figure it out for yourselves.

Anyway, if you’ve read this far I hope you like the print and it has left you slightly inquisitive about what influenced both this print and my artwork in general.