Your Demons Are The Key To Your Destiny

This image is a play on the idea that everyone has a dark side whether they like it or not, and along with your good side together they make up your personality. If everyone was nice all the time and just went along with what everyone else said and did then the world would be a very boring place.
Maybe your darker side, or your demons, are the competitive, ruthless or creative side…

That’s the way to do it! 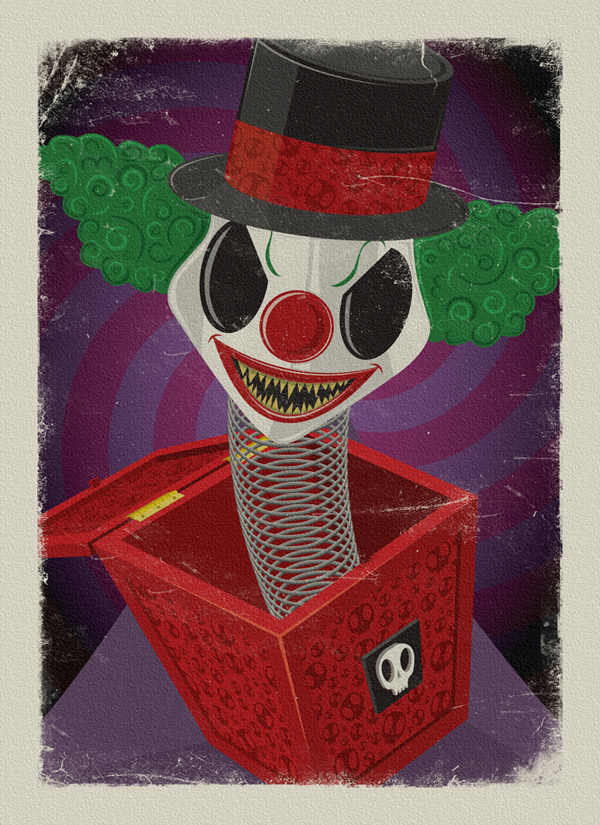 Clowns, some people like them, most people hate them. Although the intentions of clowns are to entertain and make people laugh by ‘clowning’ around with balloons, water and custard pies, there is a more sinister side to clowning. Maybe it’s quite innocent and it’s just because you can’t tell who’s behind all that smiley but very creepy make-up, or maybe they are failed bitter entertainers who want to release their anger and frustration by scaring the crap out of kids.

I don’t have ‘coulrophobia’ – the fear of clowns, yes it’s an authentic medical condition. I just think they look stupid and I don’t get any pleasure out of watching someone in mental make-up blowing up odd shaped balloons or jumping about in massive shoes while i’m trying to eat a hamburger and side of chicken nuggets. But they do make brilliant bad guys in films.

The worst for me is ‘Punch & Judy‘. I know it’s an English seaside tradition, but just hearing the horrible noise of Mr Punch shouting “That’s the way to do it!” from half a mile away down the beach is enough to send me fleeing in the opposite direction to the nearest crappy souvenir shop to buy a stick of rock and t-shirt about how I hate seagulls.

Wouldn’t it be great if for just one day giant spiders or ants ran riot on the earth. If all the little things people are afraid of suddenly got massive and chased everyone about like in movies. Maybe the dinosaurs could come back for a daytrip and cause chaos everywhere, raptors could chase people about, terradactyls could swoop down and carry people about for a bit, then just drop them in a river somewhere or something. It would be great, just a day of movie like mayhem – then at the end of the day everything disappears and everyone wakes up the next day thinking, “wow, that was cool”.

If not scary things, what about giant grasshoppers, or even ladybirds or something? Those things that are a harmless but a little unpredictable? They are fun to watch but as soon as they jump or start flying, then you get a little unsettled and make that involuntary weird noise that sounds a bit like ‘iiiiieeeeghh’. Just one day, then everything is fine? Nobody has to get hurt, just freaked out for 24 hours?